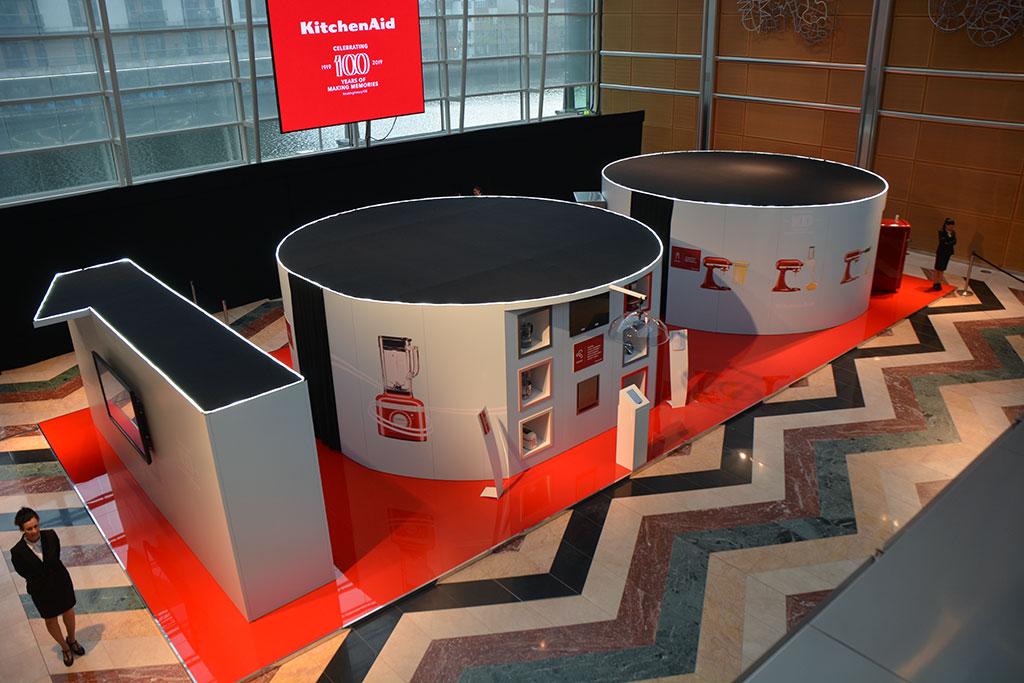 In this important context, Touch Revolution has worked alongside Timor & Sainz, an international set-up company, creating all the technological part, both hardware and software, in a concept designed ad hoc by the Business & Road agency.

For the occasion, Touch Revolution has created four technological areas aimed at providing Kitchen Aid with an interactive educational path on its products through the use of holograms, music, sensors and interactive tables.

The installations included by stage:

- an interactive hologram managed by a full-size tablet. From the tablet it was possible to change the products and see them in the hologram, with the effect of a strong visual impact;
- reproduction of lights, music, sensors and interactivity. Panels placed inside a mobile structure with which the respective sounds were emitted (emitted by the appliance) could be switched on using a tablet, creating a harmonious melody;
- construction of cubes heated and cooled internally. The idea was to convey a real feeling of warmth and coolness where the user could find pasta and vegetable dishes inside. When the user inserted his hands, the reference videos started;
- creation of four 55-inch interactive tables, specially designed to transmit a software developed by Touch Revolution that would allow users to interact with the kitchen Aid social networks and see their results directly on the social tables.

In addition, two 70 inch vertical monitors were positioned at each entrance visually displayed and touchscreen, which conveyed information on kitchen Aid products.

Touch Revolution has managed the installations throughout Europe, bringing its professionalism and experience, designing and building everything in its Milan workshop.

He also thanked the Business & Road agency for the opportunity granted in contributing technologically to the success of the European tour that paid tribute to Kitchen Aid's 100 years.